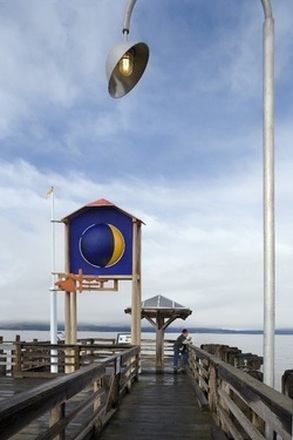 The Luna Phaser is about the tides in the river and their relationship to their principal cause, the moon.  In a way, it acts as a kind of mirror: for instead of the moon powering the tides, here it is the tides that power the moon.  Each change in tide—from flood to ebb and from ebb to flood— rotates the artificial moon slightly so that the face it presents changes in synchrony with the face of the real moon.

A large-diameter pipe with an opening at the bottom extends from deck level down into the water several feet below the lowest anticipated tide.  Inside is a float, which rises and falls with the changing water level in the river. The pipe serves to guide the float, to dampen the effect of short-period waves, and to protect the float from flotsam and jetsam.

Attached to, and buoyed by, the float is a mast (shown on the model and in the drawing with a yellow flag flying from its top) running up through the deck to the sculpture’s roof, its height reflecting the height of the river below.   Each time its direction of travel changes (from flood to ebb or ebb to flood) the mast activates a mechanical linkage (represented by the orange elements on the model) that rotates the moon.  Because the moon-advancing mechanism works off of the tides’ changes and not their absolute heights, it can accommodate all ranges of tidal amplitude.

(As may be noted from the accompanying tidal chart, the difference between consecutive high and low waters--the amplitude of the tidal wave--varies considerably: from scarcely two feet to more than ten.) 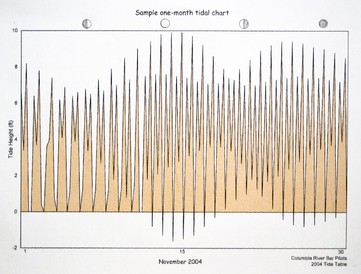 Key to the sculpture’s operation is the fact that (at least here in the Columbia River) there are, on average, 57 discreet high tides every lunar month (that is, from one full moon to the next).  Thus there must be twice that number, or 114, changes of tide (flood to ebb and vice versa) during that same period.  Each triggering of the linkage advances by one tooth a wheel with 38 teeth. This wheel, in turn, through a 1:3 geared reduction, turns the moon (3 x 38 = 114).

Sited near end of the public of the pier, the Luna-Phaser faces the town like a kind of clock tower.  It can be read not only from the River Walk, but also from a car traveling on Marine Drive or Commercial Street—though it rewards more a leisurely, up-close examination. The main event—the slight advancing of the moon—happens at intervals of about six hours.  More frequently, every fifteen minutes or so, there is a slight twitch of the mechanism as the mast inches upwards or downwards, its height above the eave indicating the height of the tide.  The orientation of the elements of the linkage (all of which are plainly visible) indicate whether the tide is coming in or going out.  Most importantly, the current phase of the moon is readily apparent: we know if we should expect the more extreme tides which occur at times of new and full moons (spring tides) or the lesser neap tides of the quarter moons.